By Martin Beebee in Featured Photo on November 8, 2010

Photos of fall color usually focus on leaves, for obvious reasons. In this photo, however, I wanted to instead focus on the patterns made by the leaves as they floated downriver, leaving the fall color, per se, as a supporting element. 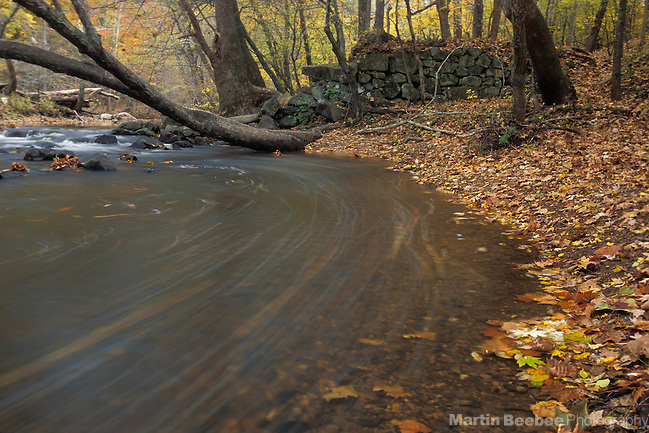 This is the site of the long-abandoned Holden’s Mill along the Eno River, near Durham, North Carolina, part of Eno River State Park. (Although at this point the mill is mostly just that rock wall in the background.) I originally shot this image for a calendar published by the Eno River Association, a group dedicated to protecting the Eno River Basin. They wanted a photo of the historic Mill site in the fall, and while I got several nice images of the old stone wall with autumn leaves, I wanted something else – something that gave more of a sense of place.

Since the mill was once a watermill (using water to power the mill), focusing on the flowing water seemed appropriate. And while the flowing water is the center of attention here, including the rock wall old mill in the background helps anchor the image both visually and topically.

I got low to the ground/water to emphasize the water and its flow, and used the diagonal/curving line of the shore to lead the eye back toward the mill’s wall, and set up my tripod on a small rock so it looks like the water’s flowing right at you. A long shutter speed (~8 seconds, if I remember correctly) blurred the leaves enough to strongly convey the sense of motion without blurring the water to a gauzy mess.