If you follow me on Facebook or Twitter, you’ve probably already seen the video project I posted on Vimeo: Mokelumne Escape. I wanted to post a little behind-the-scenes info about how and why I created the video. If you’ve seen the video, read on or re-watch it; if you haven’t, check it out!

In reality, this project began as an answer in search of a question. That is, I really just started shooting the video without a firm idea about what I wanted to produce – I didn’t have a storyboard, or much of a shot list, or really anything beyond a vague idea about putting together something that captured the fun and excitement of a backpacking trip with our dogs in the Mokelumne Wilderness (Eldorado National Forest) in California’s Sierra Nevada mountains.

Since the only real idea I had was just a sort of travelogue, I used that to come up with a vague shot list, and shot footage when and where I found it, hoping to fit it all together later. Not terribly methodical, but hey, it was my first project.

Toward the end of the trip, I started getting shots of packing the backpacks, tightening straps, stuffing sleeping bags, etc., as a way to show some of the everyday tasks of the trip. I later realized these shots would actually make a good opening sequence, leading into the trip. Since my initial footage was a bit haphazard – shot here and there, in different kinds of lighting – I ended up reshooting all the packing footage at home (which is really more appropriate, anyway).

I was initially planning on just opening with the packing shots, but thought an even better lead-in would be some footage of me being burned out in front of the computer (which is where I spend 80% of my time anyway). And with that, a clear idea finally gelled: “Getting burned out and getting away.”

I had always planned on making this more of a music video — partly because that’s simply what I had imagined, and partly because I didn’t want to deal with hauling around additional recording equipment. (We were backpacking, after all.)

The only exception ended up being the opening sequences in front of the computer. I deliberately used the camera’s built-in mic to record the office sequences, to give it a more documentary/homegrown feel – just home movie footage of some guy being bored. I wanted the quality to be higher for the packing shots, partly to emphasize the transition into the main video. For those sequences, I just recorded audio with my iPhone (which has a surprisingly good mic for these kinds of close-in shots), and synced it up with the video later.

I had stumbled across the song “It’s a Beautiful Day” by Tim McMorris earlier, and it had been rattling around my head for a while as a good soundtrack for a video. With my story idea in hand, it was an obvious choice, and I immediately licensed it through Audiojungle.

In fact, the song really ended up driving the video editing, determined choices for how long the opening sequences would be, where transitions occurred, etc. I really hadn’t thought much about how music and video worked so tightly together before, and it made me start paying attention to soundtracks much more carefully.

This was my first real video project, and it was quite a learning experience. Of course, a lot of the learning happened after-the-fact, with a fair number of forehead-slaps over missed shots, discoveries of the differences (and similarities) between shooting stills and video, and mumbling about uncooperative dogs. (The dogs are ours, though – can’t blame the agency for that one.) 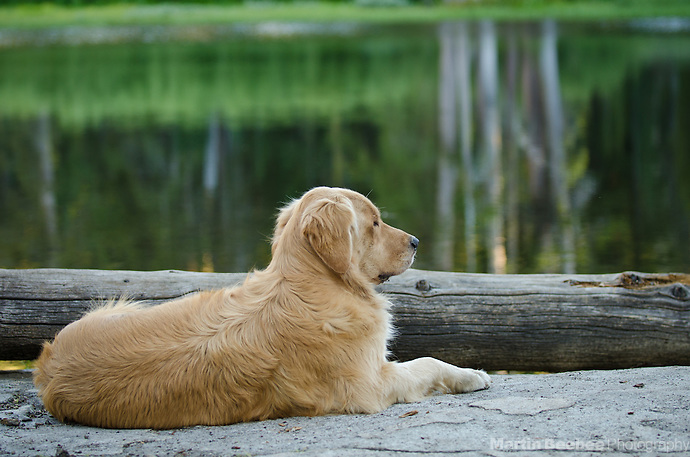 If it doesn’t look good as a still, it probably won’t look as a video clip.

This likely seems obvious to most, and I think I knew it at the time, but not until I got back and really started looking at the footage did it sink in.

Don’t forget about the audio.

Coming from being a still photographer, it’s easy to forget that video not only moves, it has sound, too. This project may or may not have benefited from some actual field audio recordings (panting dogs, splashing water, etc.); thinking about this stuff ahead of time gives you more flexibility later.

Obviously, filmmaking is storytelling; without a compelling story to tell, it doesn’t matter how neat the footage is. The project I’m working on now does have a story to tell, and – better yet – I figured out a general outline ahead of time, and was able to shoot footage accordingly. It’s nothing earth-shatteringly profound, or heartbreakingly poignant, but at least this time it’s a question in search of an answer. And that’s progress.