By Martin Beebee in Featured Photo on December 13, 2010

You have to understand that the holiday season in Tucson Arizona is not quite the traditional environment of snowy wreaths and hot chocolate. Daytime temps can be in the 80s, and nary a cloud is in the sky. So people get creative.

Take the habit of dressing up cacti. Saguaros, those classic cacti with the arms, are easily anthropomorphized (especially after a few rounds of tequila), so when Christmas arrives in Tucson, out come the Santa Claus hats and the cacti probably wish they could hide. 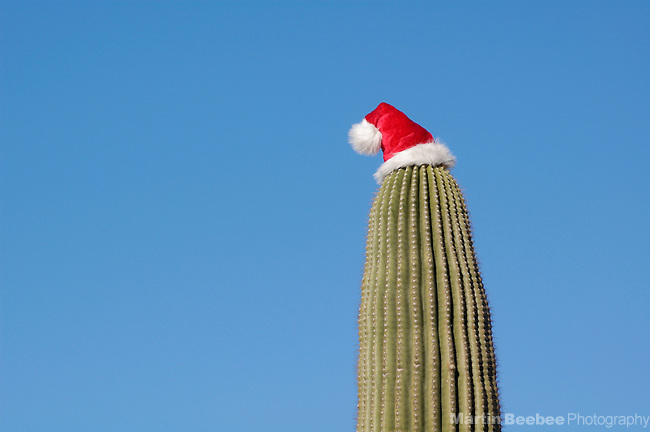 This jaunty image of a saguaro cactus wearing a Santa hat was relatively easy to make. The only thing I was interested in here was the subject – I didn’t want or need any fancy or special lighting, which might actually detract from the image. So I simply showed up mid-morning, stood on the sidewalk, and shot several images with a 70-200mm zoom lens.

To keep the image simple, I positioned myself to eliminate any background distractions so there were only two main elements: the green cactus and the blue sky. Following the basic rule of thirds, I placed the saguaro on the right-hand third and positioned the red Santa hat (which is the key element both because it’s red and because it’s a hat, which you normally don’t expect to see on a cactus) on the upper-right intersection of the thirds. The line of the cactus leads the eye right to the punch line (the Santa hat), so the image is simple, quick to interpret, and fun.